There is a growing trend of closed-loop test track facilities being developed across the United States that represents an investment of millions of dollars. Existing facilities, like Virginia Tech’s Virginia Smart Road, are places where cutting edge research on vehicles and road systems are taking place. New facilities, such as SunTrax in Florida, are currently under construction, while existing facilities, such as the American Center for Mobility (ACM) in Michigan, are expanding. These facilities are based on partnerships between education, public, and private groups focused on research and innovation of transportation technologies. Now, there is another facility in the planning stages in Pennsylvania, based on a partnership between the Pennsylvania Department of Transportation (PennDOT), Penn State University, and the Pennsylvania Turnpike Commission (PTC), called PennSTART.

Bolstering Life Safety
The PennSTART vision is to “advance a state-of-the-art training and testing facility to address the transportation safety and operational needs of Pennsylvania and the Mid-Atlantic region.” The partnership, which percolated over several years, initially focused on the need for Pennsylvania’s first responders to be trained in Traffic Incident Management (TIM). TIM effectively coordinates a comprehensive process to detect, respond to, and clear traffic incidents so that traffic flow may be restored safely and quickly. Effective TIM not only improves traffic flow, but also boosts roadway safety for the traveling public, crash victims, and the emergency responders themselves. According to the Federal Highway Administration (FHWA), 1,149,916 first responders lack adequate TIM training, including 270,000 in the Mid-Atlantic region alone. A significant contributing factor to this training challenge is the lack of access to a regional-specific cross-disciplinary facility. Servicing this training need became the initial catalyst for the idea behind the PennSTART initiative. PennSTART was inspired by a similar TIM training facility run by the Tennessee Highway Patrol Academy as well as others, like SunTrax, ACM, and the Virginia Smart Road, to learn about what it takes to collaborate, plan, and eventually operate a multi-disciplinary facility that would appeal to a broad spectrum of industry associates.

A Simulated Testing Environment
PennSTART will create opportunities to improve safety of the transportation system. The future facility and laboratories will support a wide array of new research and promote innovation in traffic incident management and training, tolling and intelligent transportation systems, work zones, commercial and transit vehicles, and connected and autonomous vehicles. The planned 110-acre site will host a 1.5-mile high-speed oval test track with an 80-acre infield, featuring an advanced testing and training environment. The facility will “allow both public and private sector stakeholders, as well as research institutions, to collaborate on technological development and deployment to create safer environments for the movement of people and goods,” says Joseph Sutor, planning manager and environmental manager, PTC. PennDOT and Penn State also recognize the need for integrating specialty and cross-disciplinary groups as a key feature of the initiative.

Why the Keystone State?
The current conceptual plan for PennSTART proposes that Penn State own the facility. The University’s Thomas D. Larson Pennsylvania Transportation Institute would operate the facility. The Larson Institute currently operates the Federal Transit Administration’s Bus Testing and Research Center at a test track facility. The University is centrally-located in Pennsylvania, and is within a four-hour drive of major metropolitan areas within and outside the state, positioning PennSTART as an important resource to the Mid-Atlantic region. Another benefit to its location is that testing can include a variety of weather scenarios. Pennsylvania experiences four seasons and varied topography. Such diverse outdoor conditions may create opportunities to push the limits of experimentation and add complexities to real-time training, making the facility and its planned activities applicable to a wide range of stakeholders. 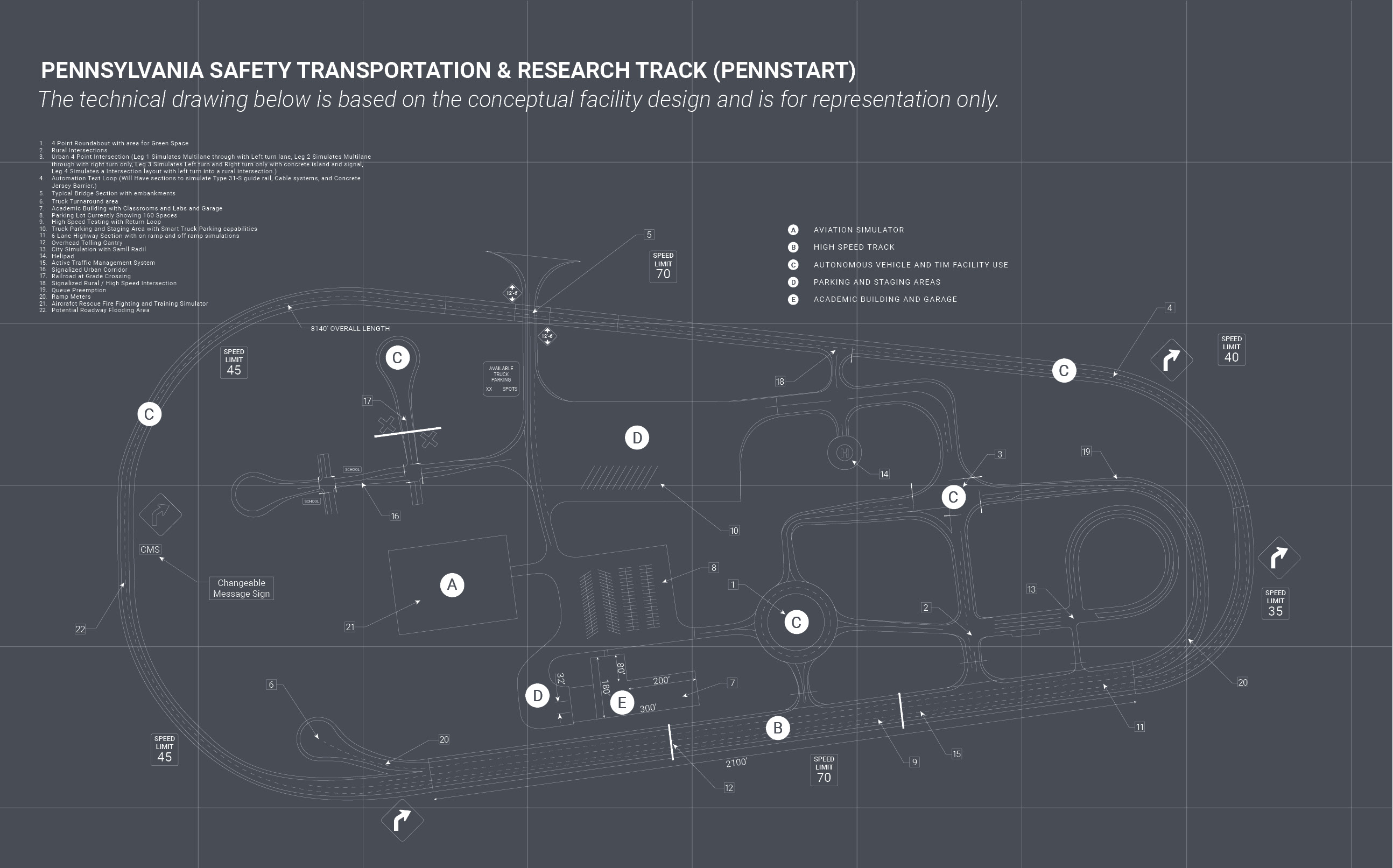 What It Takes To Get It Going
A project of this scale takes several years to launch. Current plans are for the PennSTART facility to be operational by the end of 2022. The team is using the Systems Engineering Process approach to integrate all disciplines into a systematic team effort to launch PennSTART. This approach is a hallmark of Intelligent Transportation Systems design and a requirement for anyone seeking project funding from the FHWA. This is evidence of the partnership’s strong commitment to seeing this project to fruition.

Future Implications
Imagine a future where first responders are better trained and have access to state-of-the-art facilities. What if they were trained to handle incidents more quickly and safely? If roadway innovations shortened your daily commute, how would you use the extra time? What if traffic control evolved because it was able to benefit from synergistic innovations not yet discovered? What if there were better ways to teach autonomous vehicles how to respond to traffic incidents through collaborative machine learning? Imagine the possibilities that can grow from PennSTART’s unique mission and functionality. If you are interested in learning more about the project, please visit their website at PennSTART.org. 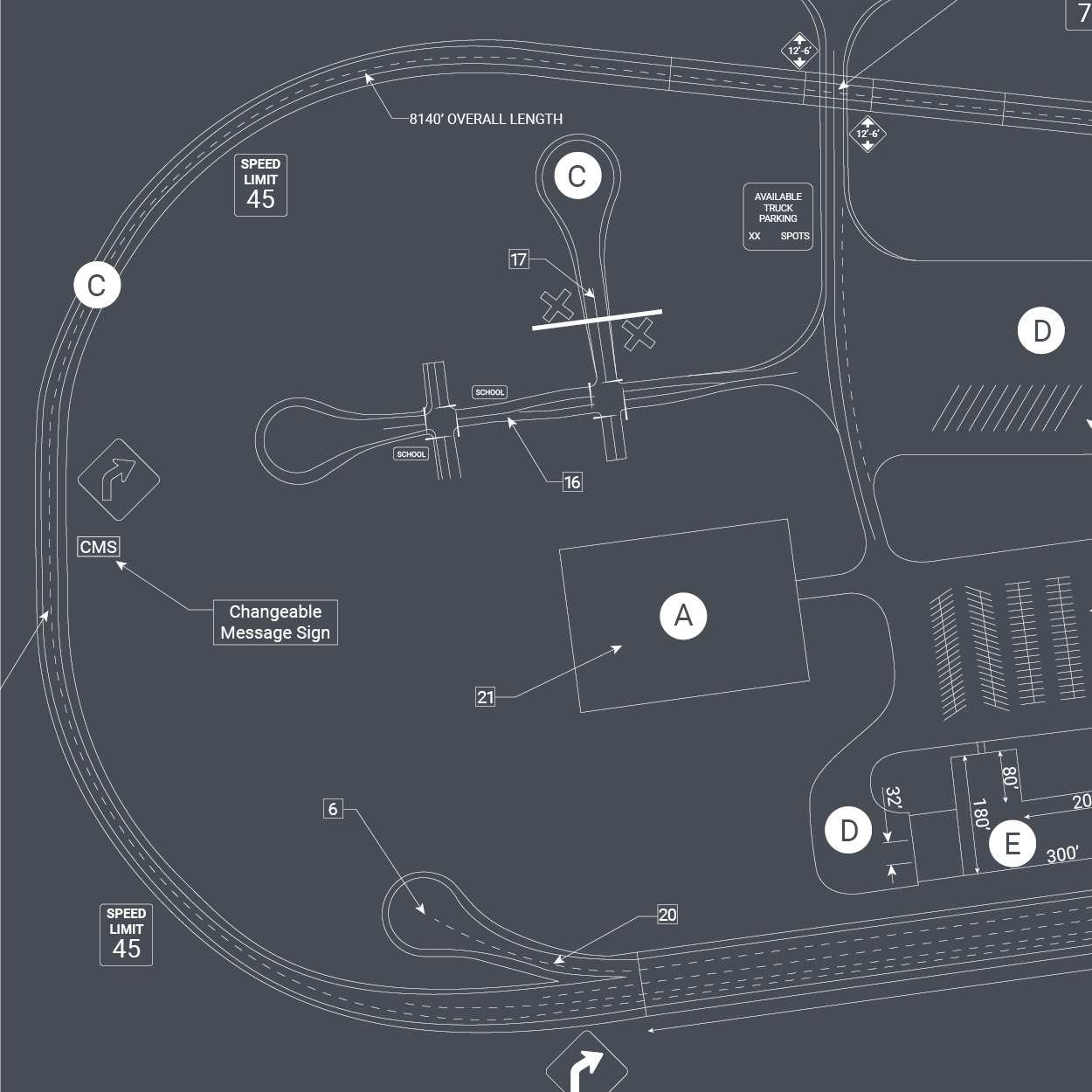 Article Name
PennSTART
Description
There is a growing trend of closed-loop test track facilities being developed across the United States that represents an investment of millions of dollars. Now, there is another facility in the planning stages in Pennsylvania, based on a partnership between the Pennsylvania Department of Transportation (PennDOT), Penn State University, and the Pennsylvania Turnpike Commission (PTC), called PennSTART.
Publisher Name
Flagger Force
Publisher Logo